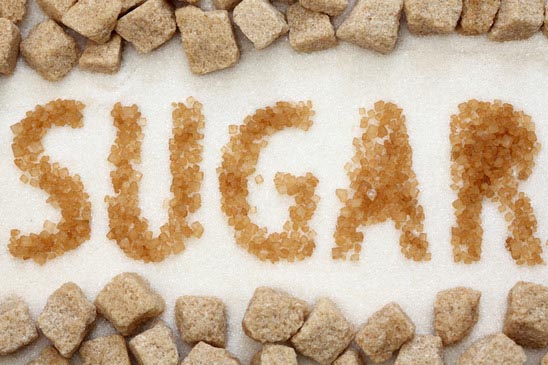 Nutrition experts recommend women consume less than 25 grams, or 6 teaspoons, a day of added sugar (9 teaspoons for men). Yet the average American consumes almost 20 teaspoons a day! And that doesn’t even include fruit juice, a known sugar bomb.

How did we allow ourselves to stray so far? Powerful lobbyists with deep pockets played a big role in our overly lax boundaries with a substance that is tanking the world’s developed nations.

Recent findings show that 50 years ago the sugar industry quietly paid for research to blame fat for heart disease and minimize sugar’s role.

Of course, now we know that the highly inflammatory effects of excess sugar are a major contributor to heart disease, type 2 diabetes, and other chronic diseases.

For instance, a study funded by the grape-juice industry shows grape juice is good for brain function, despite it packing a whopping 36 grams of sugar per cup, more than what a person should consume in an entire day. Sugar is so degenerative to the brain that scientists now call Alzheimer’s disease type 3 diabetes.

Coca-cola spent more than $130 million dollars to fund research that said exercise is more important than diet in the weight loss battle. While exercise is indeed important, how you fuel your body is equally important. We can assume Coca-Cola did not fund the studies showing a link between the obesity epidemic and soda consumption in the United States.

And, in a brazen show of hubris, the National Confectioner’s Association funded research that concluded children who eat candy weigh less than those who don’t. Despite being naysaid by one of its own scientists, the study nevertheless went on to be published in a respected journal.

Although food giants can buy their way into scientific journals, these studies are often found to be poorly designed, incomplete, and only highlight the positives while ignoring the negatives. But because the average journalist is not trained in how to discern good research from bad, bad studies get ample press.

To spotlight these problems, one science writer conducted a hoax study that concluded eating chocolate causes weight loss and watched the media play it up.

Can you believe science? Yes, be mindful of fads

Does that mean you can’t believe any science? No, plenty of good research still happens.
The trick is to ferret out the nutritional guidelines based on hundreds of solid studies and be wary of the headline grabbers.

At the end of the day, some nutritional truisms have held fast over the years: